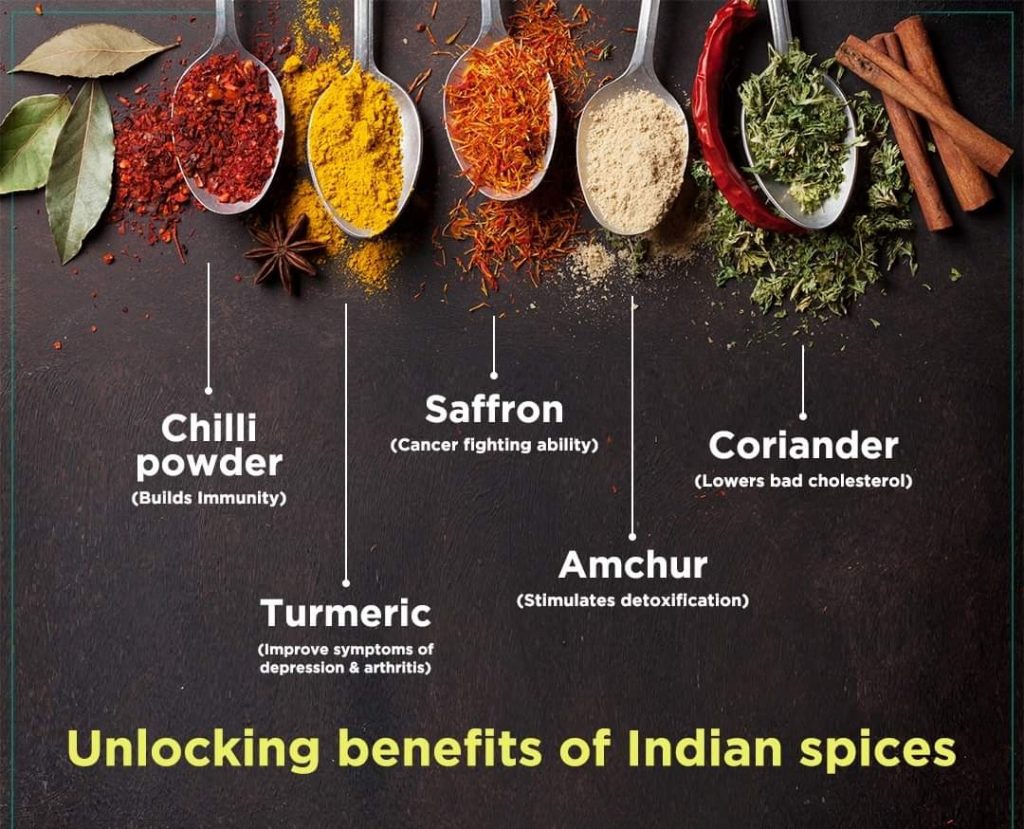 (Part 1)
Indian Spices are well known all over the world. In ancient times, many battles were fought to gain control of this land of astonishing spices. To have the possession of spices like black pepper, cardamom, cinnamon, nutmeg, clove, ginger, turmeric were considered to be a symbol of nobility and high social status during that time. Earlier generation people had the knowledge of their medicinal as well as the taste enhancing properties. Today the medicinal branches like Ayurveda, Homeopathy and many traditional treatment methods make use of the magical powers of spices, condiments and herbs in curing a lot of diseases. Below are the unlocking benefits of some of the Indian spices which we all must know.

TURMERIC :
Turmeric are of 2 types : Raw (Curcumin) and dry. Curcumin is the amazing active compound that is found within the turmeric root. It has long been used as treatment in traditional Ayurvedic medicines. It’s both antioxidant-rich and a fantastic daily supplement for promoting a healthy inflammation response in the body. To get the full benefits of curcumin however, it must come with the right support ingredients. It boosts digestion, provides relief from stomach problems.
Dry turmeric powder has been a powerful spice since ages in Indian Kitchen. It is an antiseptic and has an incredible healing properties as well. It provides relief from arthritis pain, aids digestion, boosts immunity and detoxifies the liver.

CORRIANDER
Corriander provides amazing taste to Indian cuisine. Apart from adding mouth watering flavour to the dishes, it also increases the nutritive value of the food. It has anti-diabetic properties and promotes insulin growth. Corriander seeds help in reducing bad cholesterol and promotes good cholesterol in the body. These are rich in copper, zinc, iron and other minerals that increases RBCs and improves heart health. It also helps in increasing metabolism.

AMCHUR
Amchur is dried mango powder made out of dried unripe green mangoes. Amchur is usually used when mangoes are out of season. Though it is used to add tanginess to the food and also as substitute for lemon, but amchur has lot of health benefits too. It contains many nutrients like Vitamin A, C and E and antioxidants and also used in preparing many ayurvedic medicines. It aids in digestion and ensures good bowel movement and improves digestive system. It also improves eye sight as it has important elements like vitamin A & vitamin E which are important for our eyes. It may also help to improve cardiovascular health